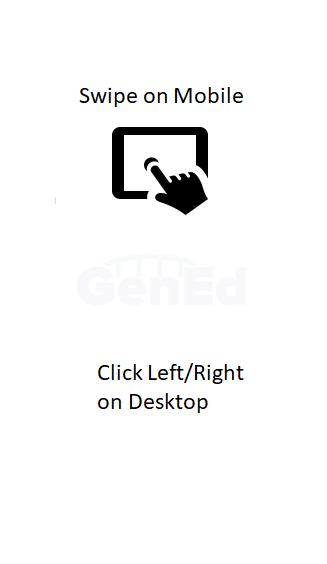 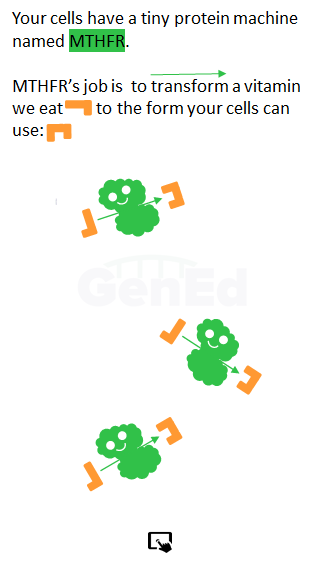 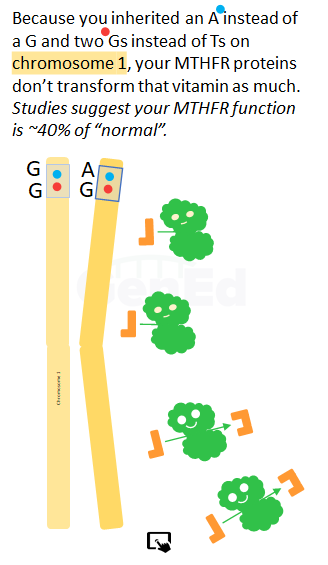 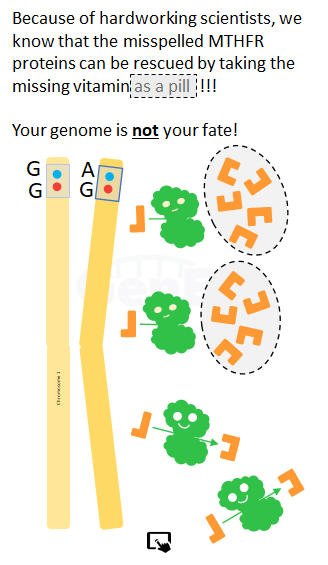 What is a Gene?

What is an rsID?

What Alleles did I Inherit?

MTHFR as an Enzyme

For Your Healthcare Provider

Your Biology Snapshot explained the main effect of your particular genotype on your MTHFR gene and how your MTHFR protein functions. If you want to get into details, follow us on a tour of the science behind your unique MTHFR genotypes. We promise, we will define the MTHFR acronym before this is all done! Let's draw a simple cartoon cell to set the stage. 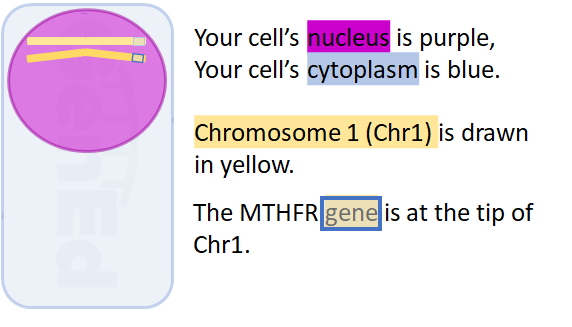 What is a gene? In the strict sense, a gene is a string of DNA letters that codes for an RNA molecule. DNA is famously known from crime shows and sci-fi movies as the three letter acronym for deoxyribonucleic acid. RNA is the less glamorous acronym for ribonucleic acid. Note the shared part of each molecule, nucleic acid. Nucleic acids are the information storage molecules of life on Earth. Nucleic acids are long strings of individual nucleotides hooked together. DNA is the stable long term information storage molecule that is passed from parent cells to daughter cells. RNA is a relatively unstable nucleic acid that participates in information transfer and even biochemical reactions. For our purposes, we will focus on RNA's role in information transfer in cells with a nucleus. Remember: a gene is a string of DNA letters that spell an RNA molecule! 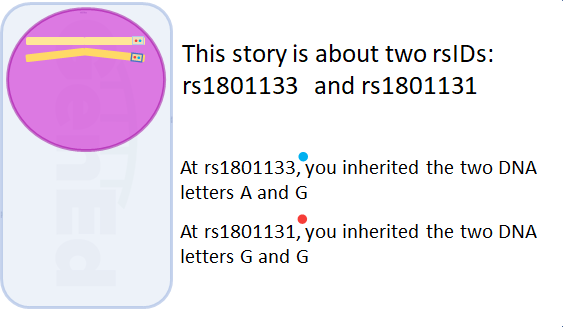 rs1801131 and rs1801133 are the two most commonly studied locations in the human MTHFR gene. What are these peculiar "rs" numbers? Biologists studying genetic variations in human populations all agreed to name locations in the genome by reference SNP identification numbers, or rsIDs. SNP is the fancy biologist acronym for single nucleotide polymorphism. Polymorphism means "many forms" and, in this case, refers to places in the genome where the nucleotide spelling is different across individuals.

Surely at this point you've had it with biologists and our acronyms. Trust us, the effort to learn the biologists' language will pay off!

How scientists discovered these two places in the MTHFR gene will be covered in a future update to this report. For now, it's enough to know that changes in the DNA letters at these two positions have consequences for the spelling of the RNA made from the MTHFR gene. Even more importantly for you, is the nucleotide letters you inherited at these two positions from your parents. You can inherit two alleles, or slightly different copies of the same gene. For the purposes of explaining MTHFR, alleles are different DNA nucleotide letters at the same rsID location. Typical humans inherit one allele from each parent. The actual allele combination you inherited is also known as your genotype. According to the data you uploaded, you inherited "" at rs1801133 and "" at rs1801131. The importance of your inherited genotype will make more sense as the tour of your MTHFR biology continues . . . 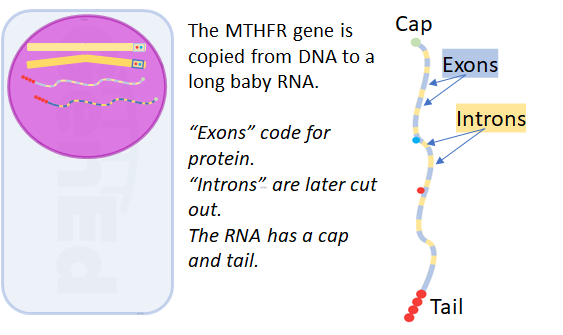 It took biologists a while to figure out why our genes are organized in this interrupted pattern of expressing regions ("exons") and intervening regions ("introns"). Exons are parts of the RNA molecule that are translated from the nucleic acid letters of base pairs to the protein language of amino acids. Our cells use a process called splicing to choose exons that are appropriate for the same protein in different developmental stages or tissues. This allows a single gene to code for multiple varieties of the same protein and turn those variants on and off at the right time! Note that rs1801131 and rs1801133 are in two different exons. This means the alleles you inherited from your parents at these two positions are copied into exon RNA that will be translated into MTHFR protein. 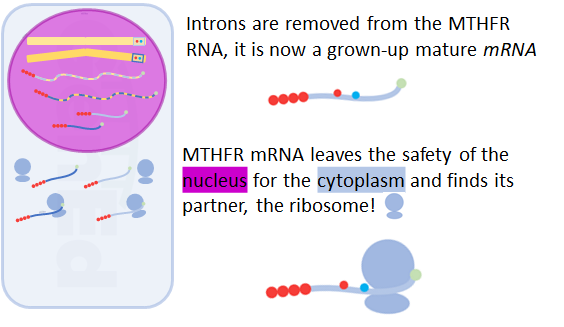 Biologists are still working hard to figure out the details of how the mRNA magically moves from the nucleus to the cytoplasm. Note that your unique spelling at rs1801131 and rs1801133 is now two levels away from the original DNA storage in the nucleus. Here, in the gooey cytoplasm, the MTHFR mRNA is bound by a gigantic nanomachine called the ribosome. The ribososome, itself composed of many structural and catalytic RNA molecules and protein subunits, reads the genetic code of nucleotide letters into the protein language of amino acid letters. Biologists call this process translation. 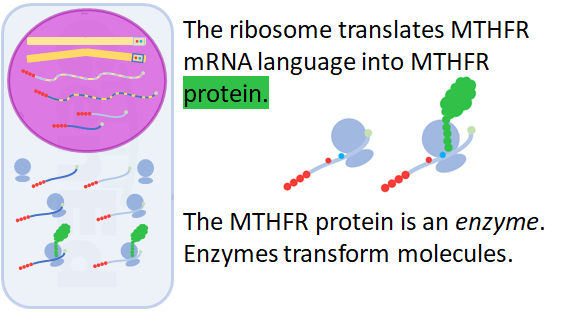 The MTHFR protein, methylenetetrahydrofolatereductase, is a machine. You might feel strange thinking about parts of your cells as machines like a screwdriver or hammer. Like those large tools you can hold in your hands, your cell's enzyme machines have specific forms that match their functions. The MTHFR protein's form is the 3D structure shared by a specific group of enzymes, the reductases. Reductases reduce. In biological terms this means adding hydrogens to chemical bonds. The MTHFR protein's function as an enzyme is to reduce the methylene part of MTHF to the methyl part of L-MeTHF. The MTHFR protein, in it's enzyme machine role, does this and nothing else. It does it very fast, and at body temperature. For the MTHFR protein to add hydrogen exactly where it should, its 3D structure has to be perfect. 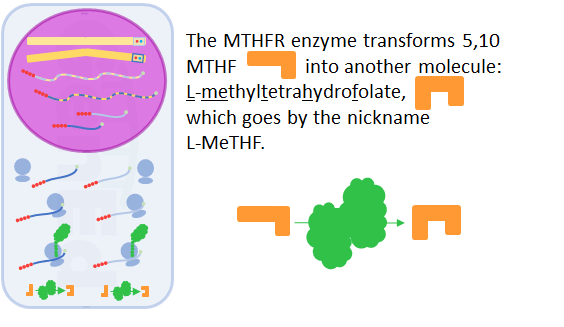 Here is the point where your individual genomic DNA spelling becomes important.

Our interpretation of peer-reviewed studies in the scientific literature (1-3) suggest that your MTHFR protein has approximately 40% of the total MTHFR enzyme function of a person who inherited the population average alleles. See where your particular genotype fits in the population statistics in the Context section above.

Why is the function of MTHFR as an enzyme important? The consequences of lowered levels of L-methylfolate are varied in the scientific literature. MTHFR mutation has been linked with heart disease [4], treatment resistant depression[5], decreased dopamine production, and neural tube defects such as spina bifida[6].

Now you have all this background information and newfound self knowledge. What can you do with it? We encourage everyone to take this report to their healthcare provider! What might they say?

Any provider reading this report is encouraged to contact GenEd directly to discuss these results. Why would one doctor say one thing and a different doctor say something else? One reason is that they may be considering different endpoints. For instance, a doctor who is considering supplementation for preventing neural tube defects may only look at evidence for those defects. They may not look at evidence for heart disease or dopamine production. Evidence for the need for L-methylfolate supplementation is different depending on the endpoint. Some, such as heart disease, have been heavily studied, while those associated with addiction and dopamine production have not. These are studies that should be done. Our hope is that more patients who own their genomic data will encourage more healthcare providers to push for these studies, to the benefit of us all.